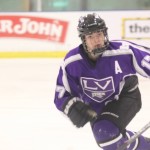 I WANT TO MAKE HISTORY

Hi-I am Corey Semmelmayer and play left wing or center in ice hockey. I am currently a junior in high school and have played on a AAA team in Las Vegas for the past 2 years.

My ultimate goal is to play ice hockey at an NCAA Division 1 college. To be able to play hockey and get an excellent education at the same time would be a dream come true for me. I am now in the middle of off-season training for next year. My tentative plans for next year is to finish my senior year in Pleasanton and play on an upper level local team. The road to college is a little more difficult then most sports that take you right out of high school. With hockey, most colleges want you to play a year or two of junior hockey before you enter college. I have played the past 2 years for a AAA team, living away from home in Las Vegas and am looking forward to playing at a high level next year too. My plan is to attend an NAHL and a USHL Junior tryout camp this summer.

I lived away from home for 2 years to help with my development as a hockey player. In Las Vegas, I had daily ice practice and worked out with a trainer off-ice 2 days a week in addition to the off-ice workouts I did on my own. I became a better hockey player because of this. My team, the Las Vegas Storm, moved into the Tier One Elite League this past season, which is the number one league in AAA hockey. I played against some of the best players in my age group in this country, that experience helped to make me a better all around hockey player.

I have been on some kind of skates since I was in Kindergarten. I started with roller hockey and then moved to ice when I was 8. I have loved every minute of it! 3 years ago my team advanced to the Tier 2 Nationals in Buffalo, NY. Our team made it to the finals, where we experienced a heartbreaking loss. Speaking of breaking, during that tournament I broke my collarbone during our second game. I have learned so much from hockey, many of the lessons I have learned were hard, but they have made me a better person. Last year I was offered the opportunity to move away from home to be on an U16 AAA team. Even though it meant leaving my family, friends and school behind, I wanted to have the opportunity to improve my game.

My goal is to attend one or two Junior Tryout camps this summer. Hockey is such an expensive sport between team fees, travel expenses and equipment it gets to be very costly. I would love to be able to raise money for my Junior Hockey tryouts this summer. I would be most grateful for any help you could give me. Thank you!